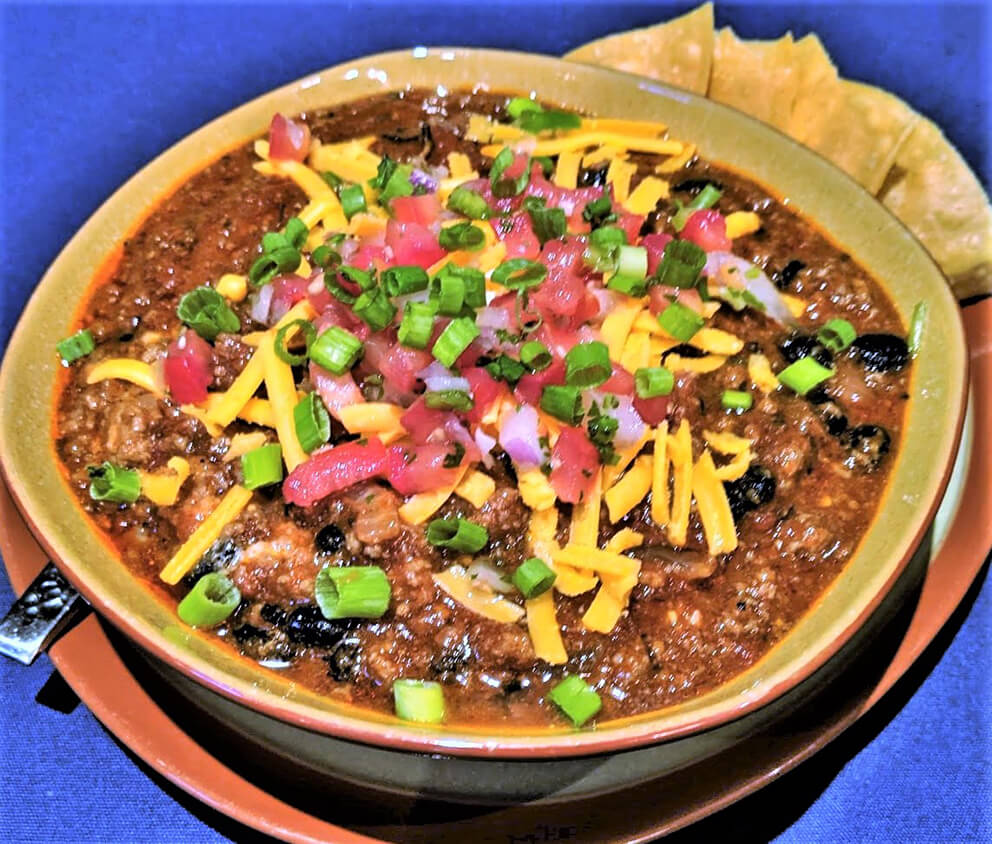 There are an endless number of types and styles of chili, but basically it all started simply as a pot of meat cooked with tomatoes and either dried red or roasted green chiles and various spices.

Most believe that Chili originated from what is now northern Mexico and southern Texas. Unlike some other Texas foods, chili largely originated with working class Tejana and Mexican women. The chili queens of San Antonio were particularly famous in previous decades for selling their inexpensive chili-flavored beef stew in their casual "chili joints".

Chili con carne is the official dish of the U.S. state of Texas as designated by the Texas Legislature.

Since its inception there have been countless versions created and proclaimed to be the only ‘authentic’ version of chili. Attend any Chili Cook-Off and you’ll see what I mean. Chili is like Mom’s Apple Pie… Everyone thinks theirs is the best version. When I first started dabbling with Mexican food years ago, the two types of chili I liked to make were Chili Verde, made with fresh green chiles and tomatillos, and Chili Adovada made with dried red chiles, both made with chunks of pork simmered until tender. I love both versions but when it came to develop the menu at the first El Torito Grill, the gringos all wanted ‘real chili… You know the kind with ground beef.”

So, I acquiesced and developed the following recipe, which is still popular today whenever I add it to one of my menus.

I typically only run it during the fall and winter months and then take it off during the spring summer to endless groans and complaints… Now you can make and have it year round. Salud!

Again, a large enameled cast iron pot works best. Heat oil over high heat and then carefully add ground beef or turkey. Cook stirring frequently until well browned breaking up any large pieces with a wooden spoon. Drain off any excess oil at this time. Add onion and garlic and cook stirring frequently, until translucent.

Next add paprika, chile powder, chipotle, cumin, cocoa powers and oregano and cook for 3-4 minutes stirring frequently. Add all remaining ingredients other than the masa and bring to a boil. Reduce and simmer 15-20 minutes stirring occasionally.

Next sprinkle the masa or cornmeal on top of the chili and cook over low heat for another 10 minutes. As I mentioned previously, this is much better when enjoyed a day after making. There is a decent amount of heat in this recipe but feel free to increase or decrease to suit your personal taste.

Serve with tortilla chips, fritos or cornbread and your choice of toppings including sour cream, cheddar and scallions.