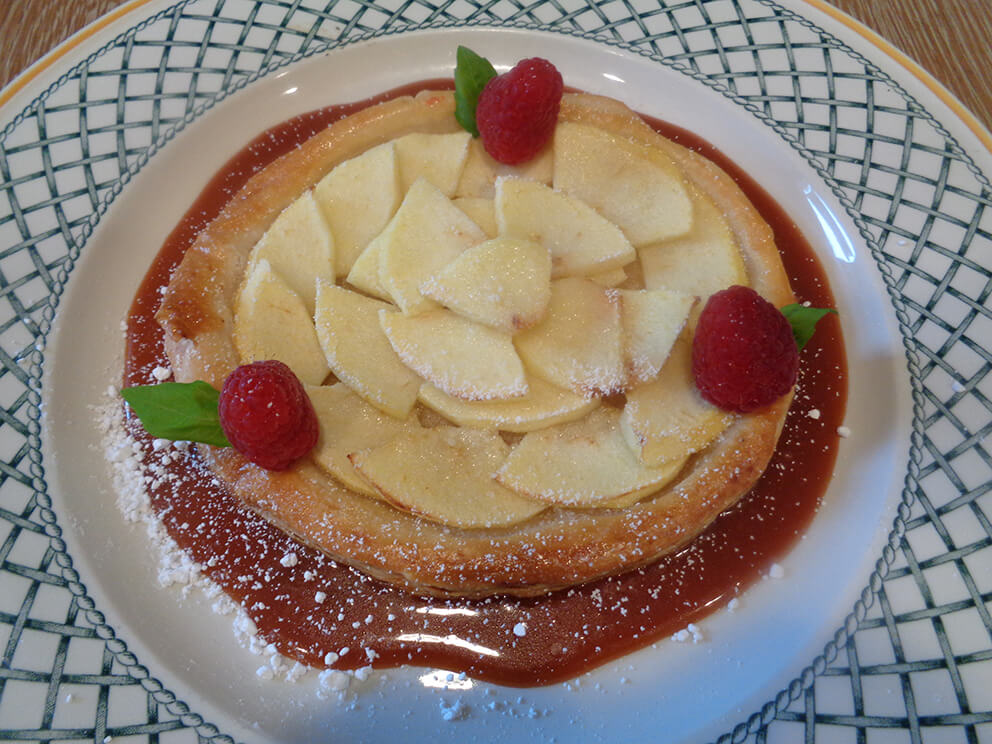 I’m not a big sweets guy but I do have a handful of desserts that I enjoy, mostly during the cooler months of the year. I guess I fit the slogan that California is truly the ‘land of fruits and nuts’ because most of my favorites include one or both of these. I opened my very first restaurant back in the early 80’s in Corona Del Mar called ‘Pave’. I was cooking in a style that was then referred to as ‘CaliforniaFrench’ which meant utilizing local ingredients prepared with French techniques… sort of ‘Paris Lite’. I served dinner only and the menu was a prix-fixe, 4 course menu priced at $40 per person, which at the time made Pave one of the most expensive restaurants in the OC.

It was also a time when ‘fusion’ cooking was introduced in California including what became known as ‘Contemporary Southwestern’ cuisine.

I became fascinated with the idea of melding French sensibilities with the rich flavors and ingredients of Mexican food and began to run ‘Southwestern’ specials each night. Dishes like Duck & Blue Corn Taquitos, Shrimp & Sweet Corn Tamale, Goat Cheese & Papaya Chile Relleno and Grilled Swordfish with ‘Painted Desert Sauce’ became so popular that I added a separate ‘Southwestern Specialties’ menu each night. Little did I know that these dishes would eventually catch the attention of El Torito founder Larry Cano and who would offer me a position that would lead to my development of the ‘El Torito Grill’ concept and eventually the opening of ‘Kachina’ in downtown Laguna Beach… But that’s a story for another post.

Larry’s number two at the time was Fred LeFranc who, when I was first hired, jokingly told me that the real reason I was hired was to get the recipe for my hot French apple tart that I served at Pave! It was a tart that was baked to order and was by far the most popular dessert on the menu. It was made with a puff pastry crust topped with a thin layer of marzipan (almond paste), Granny Smith apples with a caramel sauce a la mode (Yes Irene, you can just buy the caramel sauce).

Truth be told it’s a very simple dessert to make, but has a very sophisticated look that will impress when served hot out of the oven.

For the crust you use frozen puff pastry sheets. I recently found a great brand called ‘White Toque’ that is far superior to anything I’ve seen on the market, most of which is made with vegetable oils. Trader Joe’s also carries a good one. It’s made with real butter, puffs up well and has great flavor and light crispy texture. For a dinner party at home you can prep everything ahead and just blast them in the oven while your guests are lingering with their wine after entrees are cleared. You’re sure to great raves.

Preheat oven to 375 degrees. Place pastry sheets on flat surface and, using a plate as a guide, cut out four, 5-6” circles. Place the circles on one large sheet pan or two smaller… Whatever will fit in your fridge. Start the assembly by spreading a thin layer of marzipan in in the center 2/3 of the pastry. Depending on the brand almond paste you buy you may be able to brush a thin layer on the pastry, if dense, simply crumble into small pieces around middle of pastry. If you don’t want to mess with the marzipan you can simply sprinkle the pastry with a teaspoon of sugar…that tart still will be delicious.

Next slice your apples into 1/8” thick slices. Here you can be creative and either slice them into whole discuss or cut the apple in half and then fan them as artfully as you want for a more refined look or randomly for a more rustic feel. In either case you want to leave an outer ring of about ½” thick of pastry. If you’re making them ahead you will want to dip a pastry brush into the lemon juice and lightly coat the slices to prevent them from browning prior to the trip to the oven. Next sprinkle about half a teaspoon of sugar on the apples and drop 1 TBS. of butter on each tart broken into small pieces. 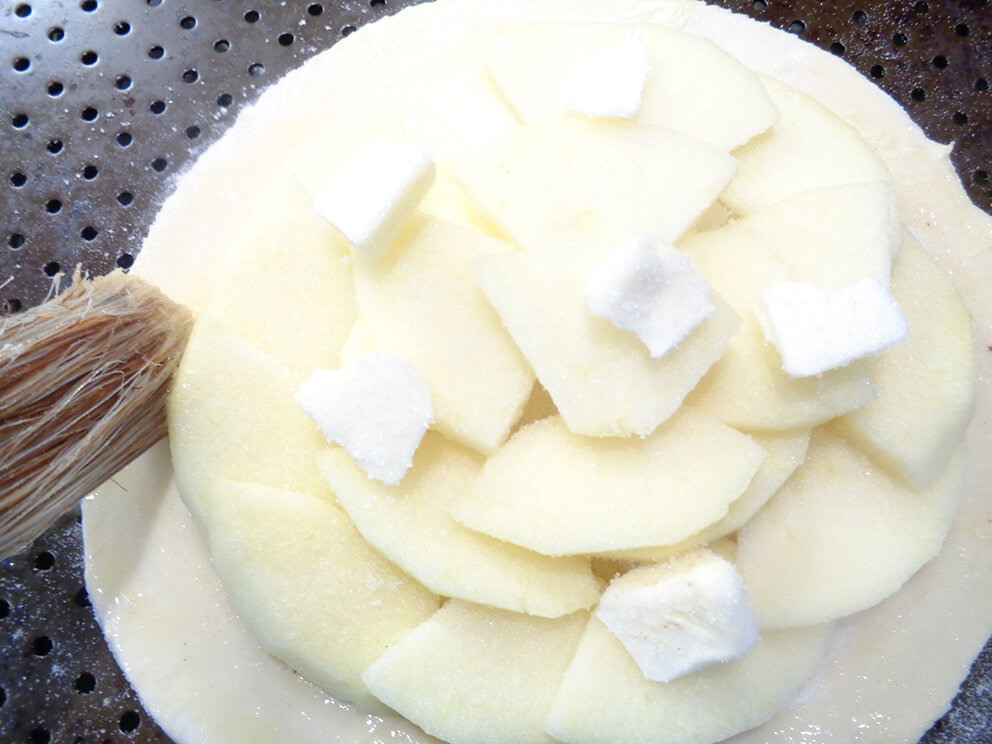 When ready to bake, brush the outer ring of dough with the beaten egg and place into the oven. (If you don’t have a convection oven you should increase the baking temp to 400 degrees). Bake for about 20 minutes or until the outer edge of the pastry is puffed and golden brown.

Place on plate and drizzle the caramel sauce in a moat around the perimeter. Garnish with raspberries, fresh mint and sprinkle with powdered sugar if desired. Optional : Top with scoop of vanilla ice cream. 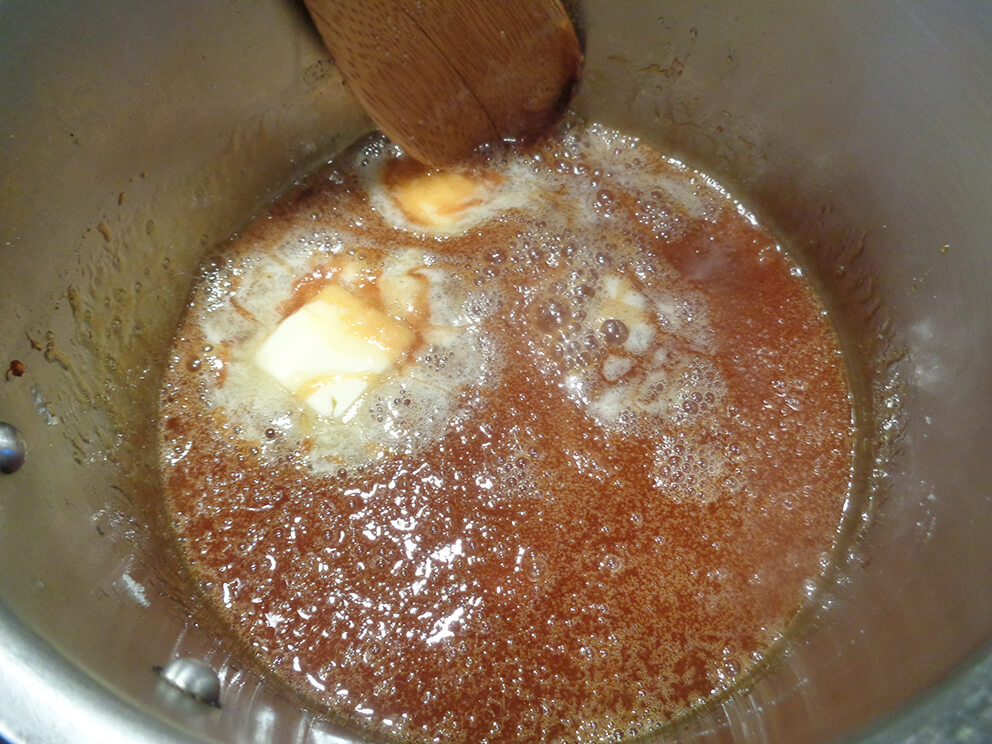 Heat sugar in saucepan over medium heat stirring constantly with a wooden spoon until it turns amber colored, not dark. Add butter and stir until completed melted. 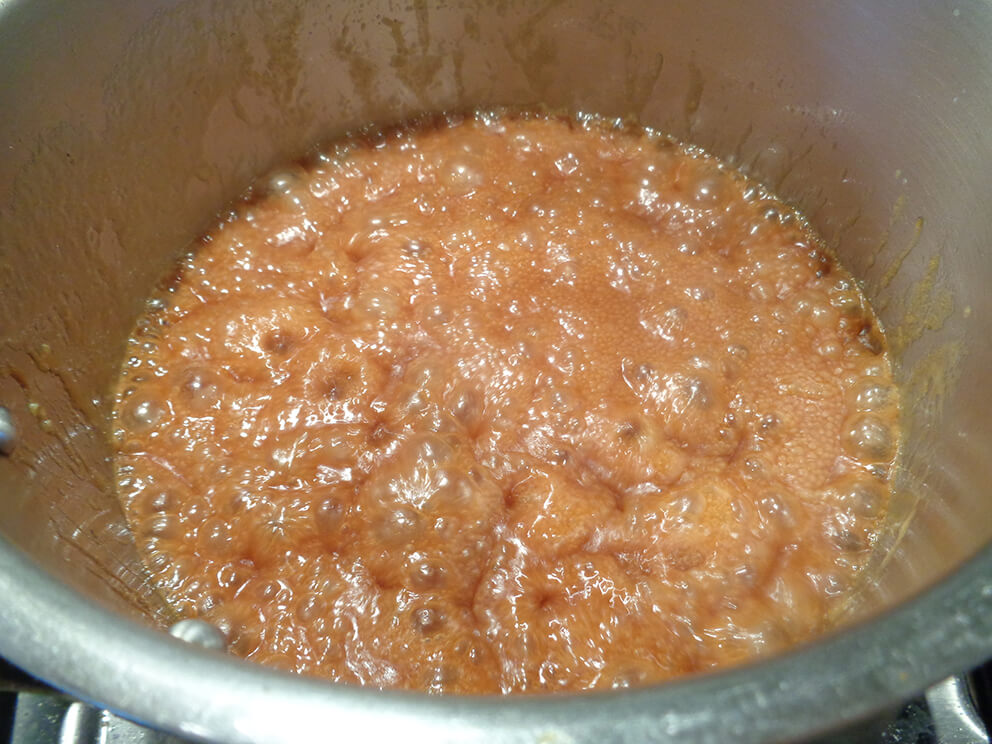 Very slowly drizzle in heavy cream, stirring constantly. Be careful as sauce will steam and boil when cream is added. Once all cream has been incorporated remove from heat add salt and stir until dissolved. The sauce can be held at room temp if you are using the same day, if not, refrigerate and heat before use.